When some people hear that new Rokon two-wheel drive motorcycles have seven horsepower, they may cough in their soup, and wonder if it is enough.  After all, isn’t a Rokon supposed to tow 2,000 pounds, climb 60% grades, and carry 600 pounds on the frame?  How can just seven horsepower do all that?  The truth is, that’s a pretty big engine for the weight of the bike.  At only 218 pounds, not a lot of power is being used to carry the bike itself around, so more of the power can be dedicated to hauling you and your stuff.  Other manufacturers use CC’s rather than horsepower to let buyers know how much power their bikes have.  When we look at it that way, a Rokon has roughly 208 CC’s, and for anyone who’s ridden before, that’s a grip of power when it gets away from you.

The old Wells Fargo commercials show a stagecoach, presumably full of gold bars, with a driver and security man being pulled by only six horses.  Rokon has one horse to spare.  Take that Wells Fargo.  Remember Little House on the Prairie?  Well, “Pa” used to drive his entire family to church with just one horse, and when he was hauling a heavy load of wood for Mr. Hanson at the sawmill, he only needed two.  Granted, if you want to hit 70 mph and huck your dirtbike over the grand canyon on new years eve, a Rokon will certainly let you down.  But if you work for search and rescue, and need to drag that guy’s carcass up from the bottom, get on a Rokon.  Horsepower, RPM’s, power curves, transmissions, and most importantly, the purpose of the bike, all play a role in how much power you need, and how much is just there to satisfy the marketing department.

As Jay Leno says “Horsepower sells”, and that’s why truck manufacturers play the game so well.  But have you ever driven a truck with tons of horsepower and it just feels like a dog?  When a high horsepower, low torque engine is combined with an automatic transmission and a heavy load, it can become downright embarrassing.  The engine makes a lot of noise, but it’s disappointing at best for the driver.  Horsepower sells, but as anyone who is serious about real power knows, it’s torque that gets the job done.

That’s the beauty of today’s Rokon engine.  Rokon two-wheel drive motorcycles are fitted with a low RPM, high compression, high torque, industrial grade engine.  Tom Blais of Rokon is known for saying that you can climb a 60% grade at 1/2 mph, and keep your feet on the pegs.  Rokon’s don’t require the rider to build up a ton of speed so momentum can carry them up a hill like other bikes require.  Instead, you select the correct gear for the job ahead, and then let that industrial grade engine pull you with all its grunting power over the obstacle, hill or mountain.

The Kohler industrial grade engine, combined with Rokon’s custom designed transmission and gear boxes help the torque get to the ground where you need it.  There is a simple beauty in using just what you need.  The Kohler 7hp engine on today’s Rokon motorcycles will give you plenty of power, without sucking too much gas, costing too much money, or adding too much weight.  Could it use a bigger engine?  On occasion.  Could it go faster, it would be nice once in a while.  But where do you stop?  It’s like getting a bigger TV, a bigger hamburger, or a bigger drink.  At some point things start getting awkward, cumbersome, or just outrageous.

Rokon two-wheel drive motorcycles are built for people who haul, hunt, camp, explore, rescue, and so much more.  For what they are made to do, Rokon motorcycles are going to have all the power you need for almost every job you can imagine.

Rokon doesn’t play the horsepower game.  Their job is to reliably get you where you are going, and to consistently bring you home.  While other motorcycle manufacturers are always looking ahead to the next thing they can sell you, Rokon focuses on refining what is already there,  to create something that is superbly reliable.  It’s not about finding how much they can add, or creating bogus marketing claims to influence you to buy.  It’s just straight shooting, good old fashioned refinement at its best.  And with over 60 years under their belts, today’s Rokon’s are a polished little gem.

This site uses Akismet to reduce spam. Learn how your comment data is processed. 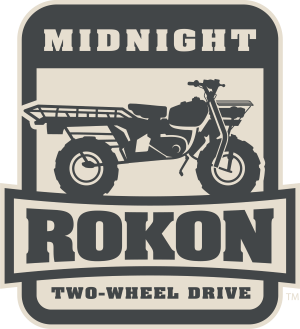 Since 1958, Rokon two-wheel drive motorcycles have crawled all over the globe. It’s hard to stop a Rokon. Midnight Rokon provides great customer service, an excellent experience, and best of all, the worlds most versatile land vehicle. Haul. Pull. Tow. Float. Rescue. Hunt. Hike. Camp. Escape. Do it all, we’ve got your back.