Rokon two-wheel drive motorcycles have been manufactured in the United States since 1958.

Rokon two-wheel drive motorcycles have been manufactured in the United States since 1958.  Used the world over by broad-shouldered, hairy-chested, manly-men and women (equality, right?) in almost any environment you can think of, these incredible mountain goats on wheels are ready for the task at hand.  Each bike is hand built right here in America, and every model is ready to explore, work, rescue and play.  Rokon motorcycles will go almost anywhere you point them.  Next to owning a helicopter, Rokons will get you further than any other vehicle on the planet. 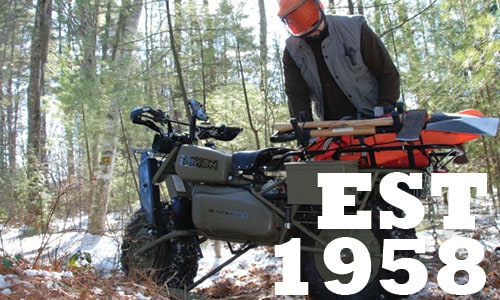 In the late 1950’s a man from San Bernardino, California name Charles Fehn applied for a patent to answer a question nobody was asking.  His quest was to invent a two-wheel drive motorcycle.  After a few tries, in 1966 his patent for a motorcycle having two driven wheels” was finally granted  Since that day, the world has never been the same.

Along the way, ol’ Charlie had to solve a unique problem that he encountered when cornering.  When making a turn, the front wheel needs to travel a further distance than the rear wheel, and this would cause the front tire to hop and jump, or the back tire to drag.  It behaved similar to a locked rear end on a truck when cornering.  The chirping is fine on a truck, but on a motorcycle, it was destined to buck the rider.

After a lot of trial and error, he finally settled on an override spring design which acted as a one way clutch.  The front tire would receive full power when going straight, but in a turn, the drive axle would be allowed to slip, slightly freeing up the wheel and allowing both to turn at different speeds while under power.  The core of this ingenious design can still be found on new Rokon’s today.

Brilliant in his own right, Mr Fehn also devised a way to turn what is essentially useless space into something of value.  He created a hollow drum wheel which could be sealed from the outside elements.  This meant riders could fill the drum wheels with fuel or water, extending their range, and time in the wild.  A side effect of the hollow wheels was buoyancy.  When the wheels are not filled with liquid, the rider can lay the bike on its side, and glide it across a shallow body of water.  The handlebars need to be held above the water to keep water out of the engine.  But the wheels can float almost the entire weight of the bike.

As the years went on, these incredible two-wheel drive motorcycles went through the natural process of product refinement and company ownership changes.  Each time a change was made, or a new owner stepped in, the Rokon as they became know were a little more reliable, a little more “dialed in” as it were.  In fact, in 1966 Rokon motorcycles became the first production bikes to incorporate a disc brake.  The brake was set up high, away from dust, water and grime.  Due to the nature of the connecting sprockets, shafts and chains, the single disc brake was able to provide equal stopping power to both tires at the same time.

In the 1970’s, Rokon entered the enduro racing scene, and cleaned up nicely in their first year, winning the AMA enduro event in Talladega, Alabama.  They were first in class, second overall, and were rewarded with a big ol’ trophy.  Although successful in racing, the program and accompanying bike design were quickly scrapped.  Development costs exceeded the profitability of the program.

One positive development that came from the racing program was the use of an “automatic” centrifugal clutch.  This clutching system allowed the motorcycle to have an infinite automatic gear range, and helped the rider keep their focus on the ‘off road’.

A cluster of one wheel drive, snowmobile engine powered, road racing and hill climbing modified bikes followed, but none of them stayed for long.  In the mid-70’s, three new bikes were introduced.  The Mototractor, the Ranger, and the Pioneer.  These new bikes also included a new selectable gearbox, allowing the use of the centrifugal clutch to be paired with low, medium and high gearing.  This meant that on the fly shifting was no longer an option, but from a standstill, riders could manually select a low gear for climbing, or a high gear for cruising, or hit that sweet Goldilocks gear for all around use.

The development of these three bikes, especially the cost of the Motortractor put a financial load too heavy to bear on the backs of Rokon.  In 1978, the money ran dry and the company went into receivership.  The company was purchased in 1981, and the new owners spent the exhausting months ahead figuring out tooling, distribution, parts, assembly methods and the like.  By 1982 they were back in business, with the decision to only produce the two-wheel drive versions of the Rokon brand.  The company was finally back to its roots.

The new owners fiddled with a couple engine designs, and opted to use a plastic fuel tank, rather than the traditional steel tank.  Decades later that decision would be reversed, allowing owners to more easily customize their paint jobs.  Today, the steel tank gives the bike a higher quality look at feel.

Through the 80’s and 90’s many incremental improvements were made to the bikes.  Engines were swapped out, and more accessories were developed.  The same basic motorcycle was going through the refinement process, sloughing off the impurities to create a reliable, long lasting, and capable two-wheel drive motorcycle.

The bikes kept improving, and the company made a few more moves over the decades, finally settling in Rochester, NH where they are still made today.

During all this time, about 20 diesel powered Rokon’s were made for a mine in Mexico, some were fitted with anti-tank missiles in Israel, Brazil’s customs department helped themselves to a few as they passed through (and later claimed there were more capable than their own tracked personnel carrier), and Jordan even began assembling their own Rokon’s right at home in their own plants.  It’s been said that Rokon’s were even present in the Vietnam and Gulf wars.  If there are no pictures, it didn’t happen.   In time, we a photo or two pop up.

Today, Rokon uses the same Kohler four stroke engine and transmission across all its bikes.  The years of refinement have produced something special.  A two-wheel drive motorcycle that is comfortable, affordable, reliable, and one that can actually do what it claims.

The beauty of the bikes is that they all stem from the same roots.  The Scout is the epitome of refinement.  It is the foundation of other bikes.  Add front suspension and hollow drum wheels and you get the Trailbreaker.  Take the trailbreaker, hit it with some camo and hand guards, and you have the hunter version.  Take the Trailbreaker, paint it black, add a survival kit, charging port, brighter lights and and an onboard maintenance kit and you’ve got the version for Prepper’s.  Want something street legal?  Again, back to the Trailbreaker, which is a Scout with shocks and drum wheels.  Take the Trailbreaker, add lights, a horn, mirrors, license plate light and on/off road tires, various gauges, and you’ve got yourself the Ranger.  Need a truck with two wheels.  The Mototractor is a Trailbreaker with a shorter seat, meatier tires, a much longer payload area.

It’s a lot like building a truck.  The frame, engine, brakes and so on are the same.  But how the truck is upfitted makes all the difference on how it is used by the owner.  So whether going on road, off road, or hauling hundreds of pounds deep into the woods, there is a Rokon model that will meet your needs.

By 2020 Rokon had been seen on TV, in films, and was was given to a president of the United States as a gift from another country.  Even Jay Leno had one visit his garage.  In 2020 Rokon had their best sales year ever, and 2021 looks to continue that trajectory.

While Rokon struggled for decades to find themselves, what we have to day is astonishing.  The two-wheel drive motorcycles can haul up to 600 lbs on the frame.  They can tow up to a ton!  They can climb a 60% grade, ford 23-24” of water (depending on Scout or Trailbreaker) and go almost anywhere you can walk.

With accessories like sidecars, log skidders, trailers, generators, pumps, mowers, and so much more, the questions is, when will you get yours?

The demand for these incredible two-wheel drive motorcycles is higher than ever, and the factory working at full capacity to meet demand.

Order your Rokon today from www.MidnightRokon.com